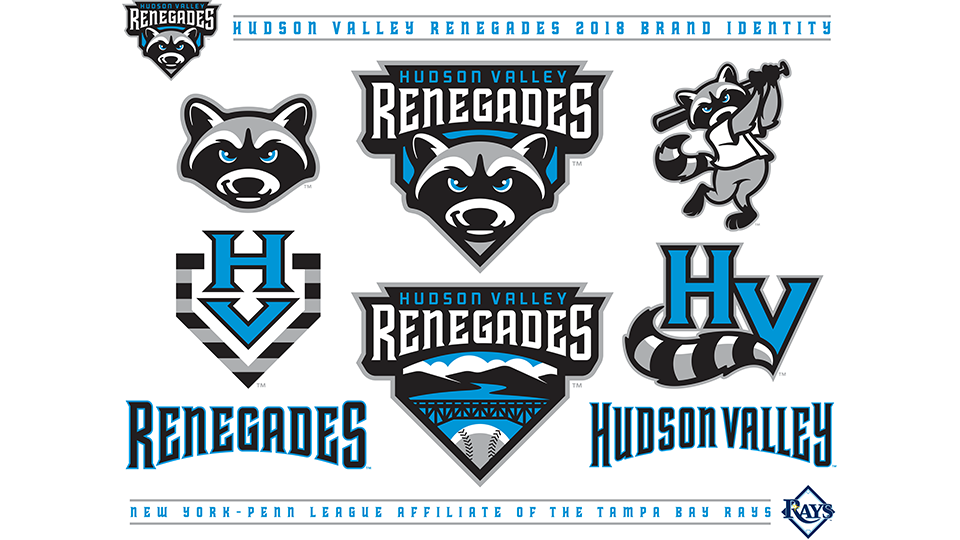 Fishkill, New York (Tuesday, December 5, 2017) - The Hudson Valley Renegades have introduced a new series of team logos, uniform designs and a custom type font which will all be implemented immediately as the Renegades prepare for the upcoming 2018 season. In addition, the Renegades have unveiled a 25th year logo which ties in the team's past look with its new identity, including three different versions which honor the previous and present team colors.

The new logo set features refreshed versions of the team's highly recognized raccoon logo and cap designs as well as a few new logos, including one which honors the Renegades ties to the beautiful Hudson Valley Region that it has called home since 1994.

"We are very excited to introduce this new look to Renegades fans and partners all throughout the Hudson Valley," said Renegades Executive Vice President and General Manager Eben Yager. "The new look includes our present team colors of Dutchess blue, black, and gray, and provides a few new logos in the set as well as revised versions of those that our fans have been familiar with throughout the years."

The team's primary logo has been updated as part of the new team identity. The familiar Renegades raccoon logo now features team mascot Rascal with an intense, competitive look with a sly smirk along with the new Hudson Valley Renegades type font. New to the team identity system will be a logo which celebrates the Renegades connection to its home here in the Hudson Valley, featuring the new Renegades type font incorporated with the familiar views along the Hudson River. Also, new to the system is the "HV Plate" logo, which features the team's familiar "HV" moniker along with a home plate outline that has the raccoon stripes as its primary makeup. The team's "HV Tail" logo has also been given a fresh new look in the new identity system.

The Renegades will be wearing new uniforms in 2018, which will include home white, road gray and alternate blue jerseys and updated caps to match them. The familiar "mask" primary cap features an updated yet familiar look with a new twist. The whites of the raccoon eyes will glow in the dark on the official on-field New Era cap. The alternate blue cap will feature the "HV Tail" logo and the new "HV Plate" logo will appear on the team's Batting Practice caps. With 2018 marking the Renegades 25th year in the Hudson Valley, a commemorative logo is being introduced to mark this historic milestone. "So many Renegades fans love the history of this franchise and enjoy their connection to different times during our history," said Renegades President Steve Gliner. "This logo incorporates our original Renegades lightning bolt script logo and celebrates our 25 Years of Fun here in the Hudson Valley. In addition, we have created three versions of the logo, each representing the colors that we have had in our team's history including the original burgundy and green followed by blue and red, and finally with our present color scheme of Dutchess blue, black and gray. We plan to marry the version of the logo to the time period of our history that we are celebrating at a particular moment in 2018."

The Renegades teamed with Studio Simon in Louisville, Kentucky to create the new logo identity system along with the 25th year logos. A leader in the sports branding industry for 25 years, Studio Simon has teamed with over 100 professional, collegiate and amateur sports teams, leagues and businesses on the development of comprehensive brand identity systems and numerous other projects to help support and build those brands. The Renegades will wear their new uniforms on the field for the first time when the 2018 season begins in Aberdeen against the Ironbirds on Friday, June 15th. The Renegades begin their home schedule at Dutchess Stadium on Thursday, June 21st at 7:05 PM against the Vermont Lake Monsters, whom they defeated two games to none to capture the 2017 New York-Penn League Championship. A limited supply of new merchandise sporting the new logos are available online now at hvrenegades.com. For tickets and more information, please call the Renegades office at 845-838-0094.